Marsh marigolds are members of the plant family called Ranunculaceae and are native to marshes, fens, ditches, streams and damp woodlands.  As with all Ranunculus, the plants are poisonous.  Marsh Marigolds have many traditional and folklore names such as, Yellow-Boots, Molly- Blobs, Horse- Blobs, Water-Blobs and Water- Bubbles.  Other names given seem to have more meaning behind them.  For instance, the Greek word “Calathos” means, cup or goblet, so this explains why they are known as King-Cups.  They are also known as May-Blobs because in ancient history, the flowers were used in church festivals and scattered on cottage doorways on May Day to usher in the month. The plant was also devoted to the Virgin Mary hence the shake spear saying “Winking Mary buds begin to open their golden eyes“.  The name Palustris is Latin for “Of the marsh”. 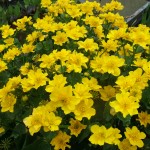 King-Cups are one of our most ancient native plants that adapted well to growing in melt water after the last ice-age.  They have waxy kidney-shaped, serrated leaves and cup-shaped glossy yellow flowers.  They flower between February and May and grow to a height of 80 cm. They are one of a few of our native species that has been awarded the AGM (Award Of Garden Merit).  Caltha’s produce lots of pollen and are very attractive to many insects including the Honey Bee, Halictid Bee, Syrphid Fly and the Giant Bee Fly.

Catha’s carry a bit of folklore with them such as, its unlucky to bring them indoors before the 1st of May.  Marsh Marigolds were also woven into hoops along with other British wild flowers and placed under milk pots to stop milk being spirited away.

All Catha’s are poisonous and contain harmful toxins and alkaloid poison, so can cause skin rashes and other irritant skin problems.  Although inedible raw, the plant has been cooked and eaten in times of famine as boiling the plant removes the toxins.  Although its poison is very potent, it does indeed seem rather strange that through the ages it was used for medicinal purposes to remove warts, and cure fits, anemia and insomnia.  The leaves were used to make herbal tea as a laxative cure and the roots were used as cold remedies to treat sores.

Here at Lilies Water Gardens, we grow 10 different kinds of Marsh Marigold species and cultivars,  some of which are more prolific in flowering, Some have double chrysanthemum-like flowers and others have pale yellow or white flowers.  We also have a giant variety which has lemon flowers called Catha Palustris var Palustris Honeydew and  an unusual variety called “Caltha Natans”, which is a creeping variety with small floating leaves and mini-white flowers.  This variety comes from Siberia, so loves being frozen in the winter. 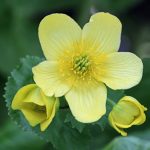 To see our full range of Caltha species and cultivars and over 750 pond plant and water garden plants, please visit our website www.lilieswatergardens.co.uk