When we think of water gardens and ponds, we imagine a picture of nature, made up of reflections, fish, wildlife and plants.  The plants we visualize are usually of Rushes and Water lilies and pond weeds that look attractive under the water.  These plants not only look attractive and bring the water garden to life but, are also beneficial for the wildlife and for getting a good balance in the pond to maintain healthy water.  A vast selection of plants have a hidden use, being edible or medicinal or sometimes both!  For example, the Sacred Lotus ( Latin name Nelumbo), has multiple uses.

I decided to do a bit of research in hope of creating an alphabetical list of edible and medicinal plants.  I have had to dig deep and expand my existing knowledge in order to create the list below, but apart from munching on odd vanilla tasting Water Hawthorn (Aponogeton Distachyos) flowers and  water-cress, I have no other personal experience of consumption or use from the list below.  I   would therefore suggest, that any readers of this blog do a little extra  research into individual species before finding a cure for an ailment or before adding any of these plants to your cooking for a free meal for your family and relatives.

Achillea Ptarmica (Sneezewort) is a moisture loving, almost bog-garden plant.  As the name suggests, when dried, the leaves can be used as sneezing powder and also as a spice.  The leaves can also be eaten raw or cooked.

Acorus (species) Sweet Flag) is a plant with many uses and is easy to grow as a marginal plant.  The rhizomes have an aniseed smell when broken open and oil can be extracted from the dried rhizomes which can be used as a scent whilst the adult leaves can be used as an insect repellent.  The rhizomes are also edible and make a substitute for ginger, cinnamon and nutmeg.  The young leaves can be eaten raw but are far more palatable when cooked.

Aponogeton Distachyos (Water Hawthorne) is a deep water plant with floating leaves and has vanilla scented flowers.  The round tubers and the flowers are both edible. 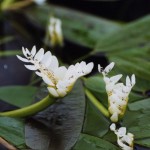 Cardamine Pratensis (Cuckoo Flower) grows everywhere  in ditches in the spring.  The leaves can be used in salads but are a bit hot and taste of mild mustard.

Colocasia (species) is a tropical marginal and also a bog-garden plant that produces tubers that can be eaten and cooked in any fashion preferred.

Cyperus Longus (Sweet Galingale) is an invasive marginal and bog-garden plant with rhizomes that can be used as a spice.

Glyceria (species) is an attractive marginal grass that grows in water up to 12 inches deep and produces sweet edible seeds.

Gunnera Tinctoria is a giant plant which has spiny leaf stems which apparently, are edible, but don’t take my word for it!!!

Houttuynia Cordata (Orange-Peel Plant) is a plant that grows in the border and also under the water. The leaves can be used as a herb substitute for Cilantro, so would be good to use in Mexican cooking.

Hydrocotyl (species), the leaves of this creeping, shallow marginal/oxygenating plant can be eaten raw but also has many medicinal uses.

Lemna (Duckweed), at last, there might be a use for this invasive, floating plant! Used raw, the leaves can be used as a garnish on salads.

Matteuccia Struthiopteris ( Shuttlecock Fern) has tightly wound fronds which can be used in cooking as a vegetable.  However, this plant should only be consumed in small quantities or in a time of famine as the fern contains high quantities of carcinogens.

Mentha Aquatic (Water Mint), this marginal plant speaks for itself.  Use the mint as you would any other mint.

Nasturtium Officinal (Water-Cress),  another marginal that speaks for itself.  I think everyone is familiar with this one and knows how to use it.

Nelumbo (species), no water plant has as many uses as the Lotus Plant.  There are so many uses that I have written an entire blog just on this amazing plant.  Its seeds, fruit, flowers, and leaves are all edible and it’s also highly valued as a medicinal plant to treat dozens of ailments. 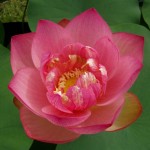 Nuphar Luteum (Brandy Bottle), this group of plants have similar floating leaves to Water Lilies but has differently formed single flowers in shades of yellow (depending on species).  The plant has multiple uses as all parts are edible cooked or raw and the seeds can be ground up and used to thicken soups and stews.

Nymphaea (species) Water Lily),  Water Lilies come from all areas of the world and there are thousands of hardy and tropical varieties with flowers all colours of the rainbow, so is undoubtedly, the showiest plant in the water-garden.  Our common native variety Nymphaea Alba, is edible.  The seeds can be used as a coffee substitute and the rhizomes, young leaves and flower buds can be eaten raw, but would probably be far better cooked.

Peltandra Virginica (Green Arrow Arum),  this shallow marginal plant is rather suprising!!!   The rhizomes are poisonous raw but edible when well cooked.

Phragmites Australis (Norfolk Rush) is a tall marginal  rush growing up to 10 ft tall and can be found happily growing in damp soil or water up to 1ft deep.  This plant has multiple uses.  When the stem is cut, it produces a sap that can be eaten raw or toasted.  Young shoots can be consumed raw or cooked and the seeds can be used in cooking .  The roots can be dried, ground up and mixed with water to make a paste for stock.

Pontederia (species) is an attractive deep marginal plant with showy blue flowers and  grows in water up to 1ft deep.  Both the seeds and young leaf stems can be eaten fresh or cooked.  The seeds can also be ground up to make flour.

Potentilla Ansernia (Silverweed) is a creeping plant with silver leaves and yellow flowers  and likes wet habitats.  The roots can be baked and then ground into flour.

Ranunculus Ficaria (Lesser Celandine) is another plant which prefers wet habitats in the spring.  The leaves must not be eaten raw, but boiling the plant will remove and destroy any toxins.  It can then be served up to consume much as you would spinach.

Sagittaria (species)Duck Potato) is a deep water marginal plant with attractive arrow shaped leaves and white flowers.  The round tubers are not only edible to ducks but are consumed by humans around the world, especially china where they also eat Trappa Natans (water chestnuts).  Sagittaria tubers can be eaten cooked or raw.

Samolus Valerandii (Brook Weed) is a low-growing wet loving plant that produces small spinach-like leaves and masses of tiny white flowers.  The young leaves can be consumed fresh or cooked.

Scirpus Lacustris (Bullrush) is a tall growing deep green marginal rush which grows in water up to 1ft deep.  The roots and young shoots can be eaten raw or cooked but the roots can also be dried, ground and turned into flour.

Sparganium Erectum (Burr-Reed) is a deep marginal rush with attractive round fruits and seed heads.  The tuber is best consumed after boiling for 10 minutes.

Trappa Natans (Water Chestnut) is a tropical free-floating plant that produces edible under-water nuts which can be eaten raw or cooked and are consumed all over the world especially in oriental cooking.

Typha (species)Reed-Mace also known as Bull Rushes)is  an invasive deep marginal rush that grows abundantly.  It has almost as many uses as the Sacred Lotus! The rhizomes can be dried and ground into flour or consumed fresh or cooked.  Young seed heads can be cut when still green and roasted and  the young shoots and the base of mature plants can be eaten raw or cooked.  Base plants will need the tougher outer layer removed, much as you would when preparing Leeks.  The leaves and bull-heads are also used by various tradesmen as they are very versatile.  The leaves can be woven and the mature bull-heads when exploded, contain a dense mass of fluff which can be used for stuffing textiles or for insulation. 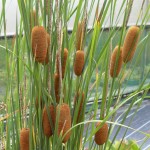 Veronica Becabunga (Brooklime) is another low-growing wet loving plant that produces masses of small blue flowers.  The leaves are edible raw but rather bitter, but are quite tasty when boiled in salted water for a few minutes.

Please note, the information provided in this blog is in no way a prescription for use.  All plants mentioned which are used for medicinal purposes or for consumption, are done so at the users own discretion and risk.