Kingfishers are one of our most vivid, colourful, British birds and belong to a group of 90 different species that come in all the colours of the rainbow.  They have a massive global distribution and have adapted to living in Mountains, Rainforests and even deserts.  Our British species (Acedo Atthis) or (Common Kingfisher), also known as the (River Kingfisher) and (European Kingfisher), can be found all over Europe, North Africa and Asia.

Common Kingfishers are shy territorial creatures and are only usually seen when they fly low just skimming the water surface, usually being spotted as a fast flash of Electric Blue.  They can be found in almost any location that supports water such as rivers, coasts, marshes, lakes, ponds, canals and even disused swimming pools.  All these environments are common feeding grounds and Kingfishers will perch quietly on branches waiting to spot small freshwater fish or invertebrates on which they feed on. They have excellent eyesight and can detect shadows and reflections.  These beautiful little birds are built for diving and will dive at great speeds into the water to catch their meals by surprise.  Sometimes, they will hover just above the water surface waiting for the perfect moment to strike. 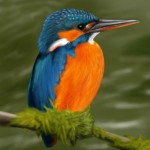 Our British Kingfishers spends the majority of their lives by themselves but both male and females take on parental skills in the breeding season, both taking turns to excavate a tunnel that will lead to their breeding chamber and will also share shifts in incubation.  Their favourite breeding locations are usually chosen and excavated from the sides of riverbanks and sometimes, breeding birds will also choose holes that already naturally exist amongst the roots of trees.  In late spring, females usually lay a clutch of about six or seven eggs and the incubation period usually lasts roughly three weeks.  The fledglings will leave the nest three to four weeks later.  Young Kingfishers have a high mortality rate from predators, starvation, pollution, and also loss of natural habitat.  Sub-zero cold winters can also take their toll on these lovely little birds and many don’t survive for more than one breeding season.   If you are lucky enough to spot a Kingfisher whilst out one day, take time to watch his antics for he will surely delight you as he darts back and forth over the water, collecting little fish for his supper.