Around the world there are around 1700 species of Gerridae, or more commonly known as ‘Pond Skaters’ or ‘Water Skimmers’.  Here in Britain, we have a common species, Latin name ‘Gerris Lacustris,’ which is known as the ‘Common Pond Skater,’ and can be found all over Britain, Ireland and Europe. Their preferred habitat where they are most at home and can be found abundantly is in ponds, marshes and even large puddles.  These fascinating little insects are a valuable link in the food chain for all wildlife found living in our ponds.  The Pond Skater has adapted well to living on the water and achieves this by spreading their long legs over the water surface, distributing their weight over a wide area.  The Pond Skater seems to have thought of every eventuality concerning life on the water surface as their bodies are covered in tiny hairs that trap bubbles making them buoyant and water resistant to any waves or splashes of rain that could cause them to get accidently submerged.

A design based on legs

Pond Skaters have six legs that are also covered in tiny hairs.  The hairs on the front legs act like sensors and pick up any tiny vibrations caused by other insects such as, small flies to even the occasional  bee that may have accidently fallen into the water, in much the same way as a spider detects vibrations from insects caught in its web.  These struggling insects now will become the Skater’s food source, the vibrations from its efforts letting the Skaters pinpoint exactly in which direction their unsuspecting victim is who unwittingly seals its fate further, by continuing to struggle.  The Skaters perfectly designed legs are adapted for speed, using their middle legs to row across the water.  With just one rowing action they can propel themselves across the water surface at quite an amazing speed of around 1metre per second, using their back legs to control the direction and to act as a rudder.  The Pond Skater still has yet more surprises in store by demonstrating a further course of action, should it be threatened from above by hungry birds or by the amphibians which share its home, and this is by using its legs to puncture the water surface in order to dive below until the danger has passed. 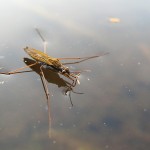 Pond Skaters spend almost all their active lives on water and only leave to hibernate, prefering natural sheltered places such as man-made sheds or under protruding ledges to do so.  At the end of April or the beginning of May, weather depending, they will then find water where they will breed and lay eggs. Theres a 6 week cycle from eggs to adults and thus being so short, allows Skaters to reproduce and colonise at a rapid rate.  However this proves to be just as well as in times of overpopulation, they will turn to cannibalism.  To overcome this problem, the Pond Skater will use its small, yet suprisingly powerful little wings to fly out of dangers way and on to other less populated neighbouring ponds in the vicinity, to escape being eaten.