When I was young, I used to like pond dipping where I would visit various village ponds with a jam jar and a fish net and see what wonderful creatures I could find hiding beneath the water’s surface or hiding amongst the pond weeds and marginal plants. But the most important part of pond dipping was, that I always released whatever I found back into the water. On rare occasions, I would be lucky enough to encounter a ferocious predator called the Great Diving Beetle. 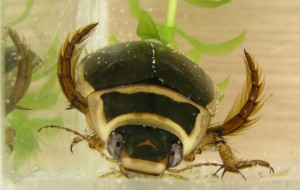 Great Diving Beetles, Latin name Dytiscus Marginalis, are one of the UKs largest beetles. Adults are black with a metallic green sheen and they measure up to 3 cm in length. These lovely beetles are native to the UK, Northern Europe and Northern Asia, and their habitat can occur almost anywhere where there is fresh or slow running water that is 30 cm or more deep.   Adult beetles have quite scary looking larvae and they all like to feed on almost anything that moves, from invertebrates to tadpoles or even small fish, it seems there’s a grand choice on the menu. Adult beetles can often be seen swimming to the surface where they expose their abdomens on the water’s surface so they can draw in and re-fuel on air which they store under their wing cases. With broad back rowing legs with fine hairs on, they use these as paddles to enable them to swim quickly underwater in order to catch their prey.

If you have ever wondered how such creatures just turn up in your pond, here is the explanation! On moonlit nights, adult’s beetles leave the water and take to the air in search of new habitats and breeding grounds, recognising new water by the moonlight reflecting off the water’s surface. Once in new habitats, the adults breed and lay eggs that hatch into ferocious looking larvae. Once the larvae have reached the pupae stage, they will crawl out of the water to pupate in damp soil or any muddy margins. When the new adults finally emerge from the pupae, they crawl back into the water again to feed, breed and migrate again on the next moonlit night.