The European Water Vole also known as the ‘Water Rat’ was once widespread throughout the British Isles. Now a protected species but sadly still in decline, their population has dropped due to habitat replacement and pollution. With the introduction of American Mink, the Water Voles main predator, the average lifespan of Water Voles is only 5 months, although they can live up to 2 years if luck is on their side. 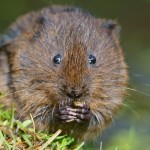 Water Voles can be found almost anywhere where there is natural fresh water. Their habitat includes water meadows, ditches, lakes and streams, and as their name suggests, they are semi-aquatic and therefore are excellent swimmers and love diving under the water surface. For Voles, they are quite large with a body length of 20cm and tail half the length of their body’s. It’s their size and unusual tail length that gives Voles their nickname as ‘Water Rats’. However, often they can be mistaken for wild Rats, but a closer inspection of their rounded noses and small ears will definitely distinguish them apart from our other furry friends.

Like many other small rodents, Water Voles have a quick gestation period of about 3 weeks where they can give birth to up to 8 babies that can open their eyes after just 3 days. They nest and live in excavated burrows and in water meadows, choosing any flat land as a perfect habitat to perform their daily tasks in. Water Voles can also be found nesting amongst aquatic Rushes and Grasses and their diet consists of the aquatic vegetation and the roots of many edible native plants. During the winter months, Voles don’t hibernate but prefer to forage food where it will be stored in their burrows.