Also known as Duck Potato, Swamp Potato and Arrowhead, Sagittaria are true shallow and deep water marginal plants that are common in the wild throughout the Northern Hemisphere.  There are about 30 wild species and a large number of these species are small and sold in the aquarium trade.  But, there also a handful of species and cultivars that are sold as True marginal pond plants.  All Arrowheads grow at different heights and produce white petal’s that vary in size. Individual species produce flowers that have different coloured brown, yellow, and maroon markings.  They are best suited to full sun but will tolerate slight partial shade.  Sagittaria thrive when grown in under water clay and mud.  In many countries, the bulbs are harvested in spring from just below the surface of the mud and eaten raw or boiled, and are also used to make Sagittaria crisps.  It’s not just humans that like to eat the bulbs hence the name Duck Potato. 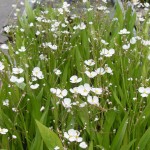 Please click on the links below for pictures and information.

The last on the list Sagittaria Graminea, is by far my favorite as it produces masses of white flowers throughout June and July.  It’s also an excellent oxygenating and nitrate removing plant and extremely useful in combating algae and blanket weed problems, thus resulting in crystal clear water. 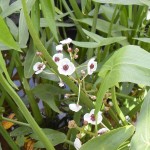