I have always had a massive interest in wildlife and plants, and by the time I had reached the age of twenty five, I had kept and studied numerous Mammals, Reptiles, Birds, Insects, Amphibians and plants. As a teenager I used to breed many species of Butterflies and Moths and that’s where I developed my interest in plants, as I had to forage plants for food in which to feed the Butterfly larvae on.  Strangely, my first wildlife interests, started around the age of six or maybe even before that.  I was fascinated by metamorphism and looked forward every spring to collecting some Frogspawn, which I would place in large plastic tubs of water and keep on my windowsill in by bedroom.  I always remember the excitement of getting home from school and seeing the now black Frogspawn cells changing in shape every day until they hatched into minute Tadpoles that within a week, were taking their first swim.  A few months later, the Tadpoles would be sprouting back legs and then a few weeks after that, front legs and before long, emerging out of the water onto bits of floating wood as Frog-lets.  I used to release hundreds back into local village ponds every year, and this hobby of mine, still exists today except nowadays, I can watch the whole process going on in my tubs and fiberglass ponds on my Nursery in which I grow all my pond plants in. 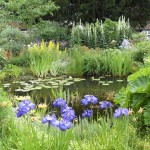 My First Ponds or Puddles!

When I was young, I loved creating wildlife ponds.  In my parent’s garden, there always seemed to be some old building plastic lying around, so all I needed to do was dig some holes and line them with this builders plastic.  I remember by parents back garden being full of various sized holes which I had lovingly dug, though fortunately, most were shallow and no more than nine inches deep and some of these holes were as little as 2 ft x 1 ft wide.  Some of my first attempts were actually successful and held water whilst others, would be full of water one day and completely void of it the next so, I quickly learnt to in future, thoroughly inspect my second hand polythene sheets for any minute holes.  At this young stage in my life I thought a bit of plastic and some water would be sufficient enough to attract wildlife, but these were of course my first attempts at pond making and soon realized, that a pond is not really a pond without pond plants in it.  I certainly had a lot to learn back then though even these small bodies of water void of any plants, still attracted an abundance of pond life such as Mosquito larvae, Water Boatmen and Pond Skaters, so it still kept me interested.

At the age of seven, my parents moved to Newdigate.  Moving to Newdigate was a lucky move for me as there was lots of land with an already established natural clay bottomed pond, which was a haven for wildlife so I was in my element.   Luckily, the pond was well established and perfectly balanced supporting a massive population of Damselflies, Newts, and submerged pond plants.  Being an already large breeding ground for Frogs and Toads, the pond was also gave me plenty of aquatic wildlife to fascinate me with for years.  However, I was still hadn’t lost my passion with creating small, man-made lined ponds and somewhere around the age of ten, I was given an old rubber dingy.  Well, I was overjoyed and instead of launching it on its maiden voyage out into the far reaches of the pond, I dug a hole on the edge of some woodland and lined it with the rubber dingy instead.  It seemed to hold water very well so I went on a mission to plant it up with some native pond plants. I found some Ranunculus Flamula, (Lesser Spearwort), in a ditch in a local woodland and took a few other submerged aquatic plants from our natural clay bottomed pond.  It wasn’t very long before the pond plants attracted various wildlife including Frogs and Newts.

A few years later, I had a collection of small man made ponds and even put one in a greenhouse where I was trying to breed some colonies of British Butterflies.  Most of these ponds were what I call, small garden sized ponds 2 ft by 6 ft. Half the pond would have a marginal shelf about six inches deep, whilst the other half would be twelve inches deep and it was around this time, that I started adding Frog Spawn to my ponds every spring. it’s is truly an amazing site to see thousands of black, wiggling Tadpoles all swimming about in the warmth of a sunlit corner of a pond, on a warm spring day.

One Day the Best Thing Happened!

It’s a well known fact that during the breeding season, Frogs likes to return to the pond in which they were born.  I had a favorite pond that I had kept going for the last three or four years, and a teenage hobby of mine.   I would lovingly clean it out and re-plant it up every spring and on one particularly warm spring morning when I went to participate in my spring pond cleaning event, I found to my delight, glistening in the sun, about three freshly laid clumps of Frogspawn. Naturally I was overjoyed and now, things have gone full circle as a that meant that a few of those small, black wiggly Tadpoles from a few years back, had made it to adulthood and returned to the pond that I had created to use as their breeding ground to start the cycle of life all over again.  This was the moment I realized I was hooked on wildlife ponds.

My Aquatic pond plant nursery is a family business that has now been established for over thirty four years and I have been collecting rare, unusual and newly hybridized pond plants for over twenty five years now from all corners of the world.  I hope you find my large and extensive variety of pond plants as interesting as I do.  www.lilieswatergardens.co.uk.

My interest in the natural world and all its wildlife has never changed.  I feel blessed  by the sounds of nature and when I hear the sound of bees and watch them feeding on the nectar of colorful flowers on a hot summers day, or see a newly emerged Dragonfly Nymph hatch into a Dragonfly, drying its wings in the sun, and take its first flight, for me, there is nothing better.